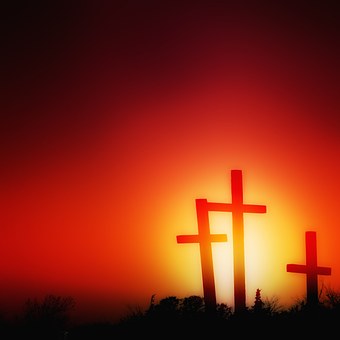 propitiation /prəˌpɪʃɪˈeɪʃ(ə)n/
the action of propitiating or appeasing a god, spirit, or person. (noun)
atonement, especially that of Jesus Christ. (noun)

In the sacrifice of Christ, something definite and specific was done about our sins. Since creation, sin had been a haunting spectre that stood between a Holy God and sinful men.

The contrast between the absolute holiness of God and the utter depravity of man is very clear. It is the recurring theme of a book of beautiful poetry like the book of Job.

Christ’s sacrifice at once demonstrates the holiness and the justice and the love of God. He does not merely ignore or overlook our sins. He punishes His Son for them.

The wrath of God stored up against every terrible thought, every wicked word, every despicable deed in humanity’s record of sins, in the past, the present and the future was poured upon Him. The Lamb of God was burdened with the sins of everyone who ever lived and would ever live; and suffered the horrible consequences of being the target of God’s vengeance.

Isaiah 53 (KJ2000)
4 Surely he has borne our griefs, and carried our sorrows: yet we did esteem him stricken, smitten by God, and afflicted.
5 But he was wounded for our transgressions, he was bruised for our iniquities: the chastisement of our peace was upon him; and with his stripes we are healed.
6 All we like sheep have gone astray; we have turned everyone to his own way; and the LORD has laid on him the iniquity of us all.

John 1 (KJ2000)
29 The next day John saw Jesus coming unto him, and said, Behold the Lamb of God, who takes away the sin of the world.

1 John 2 (KJ2000)
1 My little children, these things write I unto you, that you sin not. And if any man sin, we have an advocate with the Father, Jesus Christ the righteous:
2 And he is the propitiation for our sins: and not for ours only, but also for the sins of the whole world.

Every time you wonder whether your sins are forgiven, you doubt the efficacy of Christ’s sacrifice. Every time you try to do something to make up for your sins, you reject His work and seek to substitute your own works. Every time you deal casually and trivially with sin, you fail to see it as something grievous enough to cause the Father to sacrifice His Son.

You are the forgiven of the Lord. Where He once saw the filthy and the abominable, He now sees the pure and innocent. What a beautiful thought!