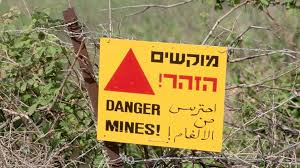 This is exactly a type which not only represents us as Believers today, but it also reflects the world.

Ephesians 2 (NKJV)
1 And you He made alive, who were dead in trespasses and sins,
2 in which you once walked according to the course of this world, according to the prince of the power of the air, the spirit who now works in the sons of disobedience,
3 among whom also we all once conducted ourselves in the lusts of our flesh, fulfilling the desires of the flesh and of the mind, and were by nature children of wrath, just as the others.

The world lives and is driven by fleshly appetites and carnal desires. These, the Bible calls lusts. People of the world are controlled and manipulated like puppets on the strings of these governing lusts. In the just quoted text, the Holy Spirit is teaching us that when we were unsaved and in the world, we were slaves to lusts and its vices and in fact we were the offspring of disobedience and wrath by nature. Ever resisting and being obstinate to the ways of truth and righteousness.

However, when we were lost and aimless in the world, we were ruled and dominated by the fleshly leadings of the outward man. This happens through the agency of lust. Does the devil have any role in this? Yes he does!!! That is why the Scriptures tell us to crucify the flesh. When the flesh is crucified, the devil does not have any tool to work with in order to put us in bondage to the lusts of the flesh. Do you want to inherit that which is yours in Christ and enjoy days of heaven on earth? You will have to do this and keep on doing it.

Paul, the great Apostle of God, had to continually do this. You will never get to a place in this life where you are beyond subduing the flesh and its lusts. Don’t forget your inward man is saved, born again. The body isn’t yet. That will happen when Jesus appears in glory and we all see him and are changed to be like Him.

1 John 3 (NKJV)
2 Beloved, now we are children of God; and it has not yet been revealed what we shall be, but we know that when He is revealed, we shall be like Him, for we shall see Him as He is.

1 Corinthians 9 (NKJV)
27 But I(Paul) discipline my body and bring it into subjection, lest, when I have preached to others, I myself should become disqualified.

This is Paul, the man who penned more than half of the New Testament’s Holy Writ, telling us he had to continually subdue his flesh, so that he would not be considered unfit for God’s prize. If he had to do that, how much more the rest of us? We have to do the same? Do you realize you can love God in your heart, but sin lavishly in an unfettered manner with your outward man? The Corinthian church was very much like that. In fact, they had demonstrations of the Spirit in their midst, but could not impact their communities, instead the licentious culture of the day impacted them instead.